I think I know what has been holding me up on creating new jewelry pieces. I've got several beads/focal pieces already that need to be made into something spectacular, but I just couldn't quite figure out what I wanted to do with them. I had tried some things that didn't work so well and other things that, while beautiful, just weren't really what I wanted to produce. 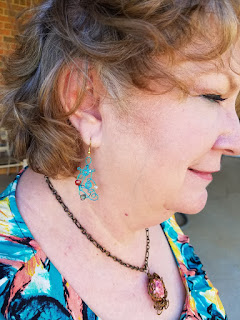 I've tried my hand at a variety of techniques including wire crochet, Viking knit, kumihimo, and even some wire wrapping, but each one seemed lacking in some way.  A few weeks ago, I was wandering through Michael's with a 30% off coupon and spotted some books.  Two, in particular, caught my attention.  I picked up the first one and glanced through, deciding I didn't really want it.

I then picked up the other one, Freeform Wire Art Jewelry.  The photo on the front was gorgeous.  The photos inside were quite detailed and beautiful.  The pieces were stunning!  I saw that the author, Gayle Bird, said she had designed the book to be a course, with one item building upon the techniques learned in the previous.  I decided to get it.  I didn't realize until I got to the register that my coupon wasn't good on books, but I had fallen in love with what I had seen and bought it anyway!

I have been learning and practicing.  I have been wearing some of the pieces I have created and people love them!  I let some family members choose some for Mother's Day and birthdays.  They all had a hard time deciding!  That's a good sign!  The photos I have are not great because I was in a hurry, but you can get an idea of what I'm doing. 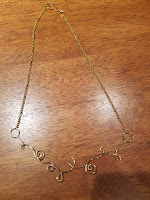 I created this necklace from a practice piece per the instructions.  I have since added some crystals to it because it just seemed to need a little sparkle!

It even has a handmade clasp! 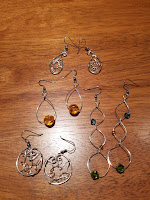 I started making earrings next.  A friend ended up with those long ones on the lower right.  They were way too long for me, but perfect for her!  The paisley ones at the top are my own design and I have an idea to incorporate some polymer clay onto those. 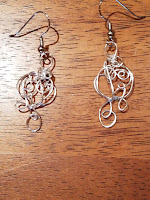 These about drove me crazy!  I kept running out of wire and would have to start over.  They aren't exactly symmetrical, but I figure they're close enough for me to wear! 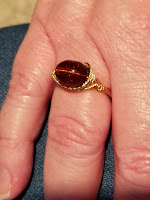 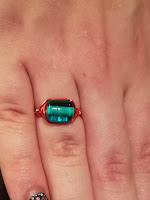 Then, I moved on to rings.  I made this one for my daughter.  It was my first attempt and she loves it!

So, I made one for myself! 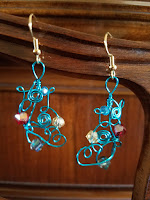 I made another pair of earrings and fared much better this time.  I even added some crystal beads! 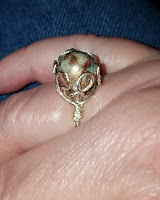 I tried my hand at some other rings and then made this one.  This was my first piece to incorporate polymer clay into the design.  This is one of my faux raku beads that I made quite some time ago and couldn't decide what I wanted to do with.  It was just waiting for me to learn how to turn it into a ring!

I moved on to pendants, and after making a few, I decided to use one of the faux raku roses that I still had to create a pendant.  It's one of my favorite pieces and I get lots of compliments on it!  I just made up some more roses to experiment with different designs.

This was one of the designs I created for Mother's Day/Birthdays.  My mother-in-law chose this one. It's a glass bead with double wire swirls and loops.

This is another one that I made with double wire.  The bead is Mother of Pearl in a turquoise color.  My mother chose this one.

This is the same glass bead as above, but this time I used a single wire to create the loops and swirls, intertwining them as I went. I love how it turned out!  My niece chose this one for her birthday.

This is a shell that I had and I was so excited about how it turned out!  My other niece chose this one for her birthday.  I have more shells, so I will make more!

This was one of the early pendants that I made. It has different sized fire polished Czech glass beads.  I used copper wire and put it on a long copper chain.  My sister-in-law chose it for her birthday/Mother's Day.
I started learning to wrap cabochons. I was trying to create faux sea glass for this one, but I think it looks a little more like jade. I'll have to try again with a different brand of clay.  My sister-in-law's mother chose this one for Mother's Day.

I have a couple of other pieces that were also options, but weren't chosen.  They are both polymer clay pieces that I used for some of the earlier designs called for in the book.  I'm not entirely happy with them and may make some changes. although my niece debated long and hard over the blue one!  She already has another piece from that same batch of clay, so chose the seashell instead. 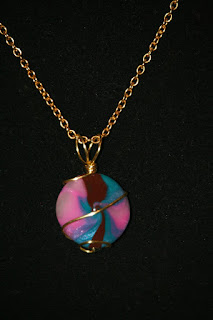 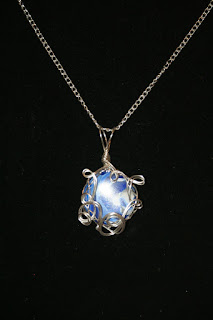 While I plan to still use some of the other techniques I have tried, freeform wire wrapping looks destined to become my preferred way to finish most of my pieces.  I still haven't done all of the designs in the book and I have a number of ideas bouncing around in my head.  I've also been saving ideas on Pinterest and I've found some YouTube videos with designs I like.  I'm excited to get more designs made up!

And there you have it!  Many of these can be recreated, so if you see something you want, just let me know and I'll give you a price!
Posted by Betty Bolerjack at 7:20 PM