Putting My New Studio to Use!

If you've read my recent blog post or are one of my Facebook friends, you know that we recently moved after more than a year of being in what can only be referred to as chaos!  I had at least three options for where to locate my studio in our new home.  After careful consideration of each one, I chose to put it in the closet in the office.  I began setting up my studio immediately after we moved in.

My work table was stored in a friend's garage and we had some challenges in coordinating our schedules to get it.  As soon as my table arrived, though, I got to work.  I had decided a few weeks ago that I would like to make a pansy. 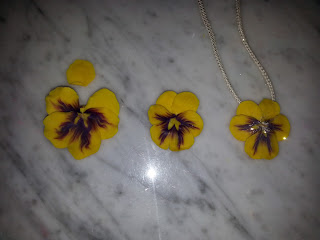 The pansy on the left was my first attempt prior to the move.  As you can see, one of the petals broke off.  I finished the middle one just before we moved.  I made it smaller with slightly thicker petals.  As I was fiddling with it to prepare to make it into a pendant, I realized one of the petals on it was also broken although it didn't break completely off.  Third time's a charm, right?  Once my table was set up, I got busy and made a third one.  I did it a little differently and it seems to have worked!   I showed them to a friend who commented on how realistic they look! 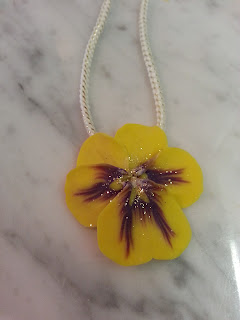 Here's the finished pendant.  I wanted to use some gold mica powder in the middle, but I couldn't find it until after it was curing in the oven!  I decided to use some fine glitter instead and I rather like how it turned out. 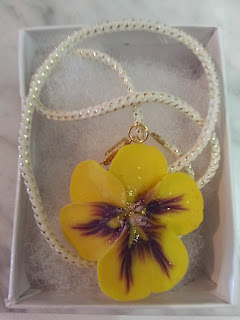 This pendant was a gift, so I boxed it up and delivered it a few days ago.  The recipient was delighted!  Time to move on to other things...
Posted by Betty Bolerjack at 7:05 AM

Email ThisBlogThis!Share to TwitterShare to FacebookShare to Pinterest
Labels: pansy